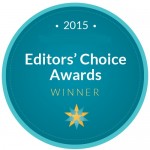 Our Editor’s Choice Award for the Best Down-Imaging Fishfinder goes to the Raymarine Dragonfly 5PRO. We feel that the new Dragonfly offers superior CHIRP imaging capability that surpasses other units on the market. The wide spectrum CHIRP sonar pulses across multiple sonar frequencies simultaneously. With more sonar pulse entering the water, the Dragonfly can see underwater objects with photo like clarity and pinpoint fish with incredible accuracy. But the amazing sonar imagery is just the beginning. Our tests have also shown that Dragonfly sonar keeps track of the bottom and marks fish better than any other unit in this price range.
The Dragonfly is equipped with 2 independent CHIRP channels – downvision and fish targeting sonar. Both outputs can be displayed on the screen at once which is a very effective way of targeting fish and discriminating the bottom. Dragonfly remains the only recreational fishfinder model that has CHIRP support for down imaging. The quasi-CHIRP provided by Lowrance in their Elite CHIRP series supports 2D sonar only.

CHIRP resolves several problems with the single/dual frequency sonar. With the regular sonar when you increase sensitivity to see more targets, you increase clutter both near the surface and in the water column. But if you reduce sensitivity to remove clutter from the display, you could miss fish targets. Because CHIRP sonar uses multiple frequencies within each signal, you get the benefit of seeing more fish targets with the less cluttered display. Individual game fish can be easily identified in and around bait schools and game fish easily seen when holding near structure on the bottom.

Dragonfly’s optically bonded LCD delivers brighter colors, sharper contrast and is guaranteed to never fog up. It’s a beautiful display, boasting 1500 nit brighness that allows it be seen and read in direct sunlight. The heavy duty balance socket mounting system allows you to install the fishfinder on any surface. The mount is adjustable so you position your display for optimum viewing. The Dragonfly excels is offering maximum screen size with the smallest possible foot print so that the unit can be mounted anywhere.

The new Dragonfly 5PRO provides support for the WiFish mobile app that allows you to wirelessly stream sonar output to a mobile device. You can view, rewind and pause sonar output on your phone or tablet. The GPS supports multiple mapping solutions including: C-MAP by Jappesen, Navionics or Raymarine’s Lighthouse charts. The base 5PRO unit comes with C-MAP Essential maps. The Gold version with the Navionics Gold charts can be purchased for additional $50.

With Dragonfly’s high fidelity downvision, superbright display, and smartphone integration, you will never look at fishing the same way again. The unit is extremely easy to use, you turn it on and it does what it’s supposed to. The Dragonfly 5PRO costs $549 which is great value for this stellar technology. The Dragonfly series is years ahead of the other fishfinders and the competition hasn’t caught up yet. The Dragonfly is still hands down the best down-imaging fishfinder available to anglers today.