The Basics of Catfish 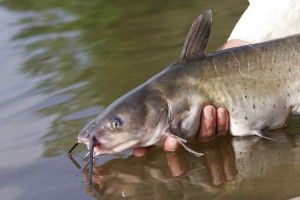 Catfish are among the most common fish in the world. These freshwater fish are found on every continent except Antarctica, and there are approximately 3,000 species of catfish. They’re typically found in freshwater rivers and lakes, although they can also be found in coastal areas. The most common types of catfish in the United States are blue catfish, channel catfish, and flathead catfish. Catfish are named for their flattened heads and by their whisker-like barbels. Those barbells are used for both smelling and tasting.

Adult catfish are mostly carnivorous eaters, with their preference being fish, insects, and worms. Younger catfish tend to eat more tiny plants in the water. Catfish generally feed through suction, rather than biting, and are most commonly bottom feeders. They are scavengers by nature, so catfish will eat basically anything they find. Catfish may also be called polliwogs, mudcats, and chuckleheads. Catfish do not have scales. Instead, they either are plated with armor-like shells or naked. Catfish have many predators, including larger fish, amphibians, reptiles, mammals, and some birds. Catfish have a sweet, mild flesh that is very popular throughout the world, so they are a common choice for fishing.

Catfish do not have scales. Instead, they either are plated with armor-like shells or naked. Catfish have many predators, including larger fish, amphibians, reptiles, mammals, and some birds. Catfish have a sweet, mild flesh that is very popular throughout the world, so they are a common choice for fishing. 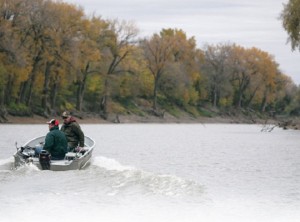 Catfish don’t have a specific preferred habit. They are found in virtually every freshwater location. However, they are most commonly found in shallow running waters, with mud bottoms. During spawning season, you’re most likely to find catfish in cavities found in rivers and lakes, such as hollow logs and washed out areas under boulders. During spawning season, the females lay 10-90 eggs at a time, near the surface of the water.

Catfish may be found in submerged structures in water, too. The flowing waters below dams in larger rivers are good locations, too. There are areas of slower-moving water between the dam gates, which are favored by catfish. Always remember to fish on the bottom of whatever site you choose.

There are a number of different baits you can use for catching catfish. The most common baits used for catching catfish include nightcrawlers, chicken livers, grasshoppers, minnows, cut bait, and stink bait. Most fishermen prefer chicken livers, but just about any bait with a strong odor will attract catfish. If you want to catch larger catfish, then it’s probably a good idea to use fish bait. Please check your state laws regarding fishing regulations before you make your choices about bait.

When baiting the hook, if you leave the hook points exposed, you will improve your chances of catching a catfish. Since catfish are often suction feeders, they don’t have a lot of biting experience and can easily slip off a regular hook.

Another option is to use circle hooks, which are more difficult for a fish to shake off. If you get lucky, a circle hook can actually trap a catfish without the use of any bait at all. You may try a sponge hook if you’re fishing with stink bait or dip.

Choosing a Rod and Reel or a Pole 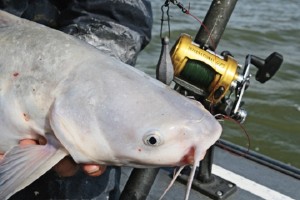 There is no particular rod and reel combination that makes catching catfish easier. Feel free to use whatever makes you the most comfortable. A catfish rod is sturdier if you’re trying to catch larger catfish. It always helps to have a little more stability to hold the rod.

If you opt for using a pole, then juglines, trotlines, and limblines are all popular ways for fisherman to catch catfish.

Whether you opt for a pole or rod and reel, remember to fish from the bottom of the water. You should use a heavier weight line than you use for other types of fish. Use a 10-pound test line, at a minimum. The average size of a catfish is 2-7 pounds, with some considerably heavier than that.

There is no tried and true technique for catching catfish. Catfish are more active at night than during the day, so darkness is the best time to fish. Even more specifically, catfish usually feed from sundown to about midnight, so late evening is the best time frame to try to catch them. You have the option of still-fishing or drift-fishing. Still-fishing means you are fishing from a fixed location, such as a pier. Put the bait in the water and wait for the fish to bite. Drift-fishing is usually done from a boat. The simplest form of drift-fishing means you allow the wind to pull your boat across the water, and drag the baits along as you move.

Again, please check your state laws before trying these methods, as these methods may not be legal in all areas.

Bobber fishing is NOT recommended for catfish, due to the fact that they are bottom feeders and are more likely near the bed of the river or lake. Don’t wait forever for the fish to start biting. If you haven’t gotten a bite in 30 minutes or so, move on to another area. Catfish are not as social as other fish, so one bite or catch doesn’t necessarily mean there are more catfish in the area.

I hope these tips have been helpful. Catching catfish isn’t a sport that requires any special knowledge, just some time, patience, and a little luck to find a good fishing area. Even a beginner angler is capable of taking home some catfish after a day of fishing, particularly since catfish are common in nearly every freshwater body of water. Catfish have a very mild flavor and make a delicious meal. Remember the basics, and you’ll be moving on from small catfish to much larger ones in no time at all.