Garmin echoMAP 73sv has an average rating of 3.5 out of 5 based on 4 user reviews. 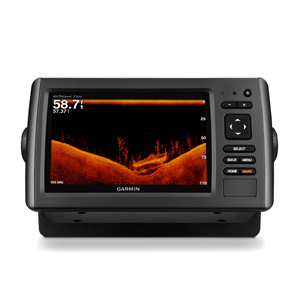 New for 2015 is the Garmin echoMAP 73sv fish finder/chartplotter. The unit comes with the power/data cable, a quick-release and flush mounts, a protective cover, the GT 40-TM, 12-pin transducer, all of the necessary hardware and an owner’s manual. The quick-release mount is exclusive to Garmin and enables anglers to permanently install the swivel mount and cable. The fish finder then easily snaps onto or out of the mount for quick removal without having to worry about plugging and unplugging cables.

The unit functions using 500 watts of power, which is more than enough juice to produce the quality images anglers have come to associate with Garmin products. The large 7-inch screen displays images in 480 x 800 pixel resolution having a convenient 16:9 aspect ratio. The controls are clearly marked and similar to the 50s series models. The power on/off button also controls backlighting when needed. The select, home and mark buttons accompany zoom in/out and four-way toggle function.

The echoMAP 73sv comes with the high-quality LakeVu HD mapping system that illustrates more than 17,000 U.S. lakes, rivers and reservoirs in tremendous detail. The software also features subsurface views of 5,700 lakes and contour shading for depth recognition. Along the shoreline, anglers are able to see specific points of interest ranging from bridges, boat ramps and docks to campgrounds, main or secondary roadways. Navigate to and from popular fishing spots by plotting up to 50,000 points, 5,000 way points or 100 routes.

Save favorite locations on a micro SD card for future excursions. The SD cards are also handy if deciding to upgrade the system to the BlueChart g2, BlueChart g2 Vision of LakeVu HD Ultra series. The Garmin systems enable anglers to use a goto function on the spot that calculates distance and time variables from current position to a distant location in addition to displaying the most direct route. As the system includes the 5Hz GPS/GLONASS receiver, images update seamlessly every five seconds.

Anglers have the option of using the dual-frequency 50/200 kHz or the dual-beam 77/200 kHz sonar. Unlike some fish finders, all of the ping emissions and return feeds are accomplished using a single transducer. Though optimal images occur at depths of up to 750 feet, depending on water conditions, the 77 kHz capability in particular has shown to effectively reveal underwater terrain and marine life in depths of up to 2,300 feet in freshwater and 1,100 feet in salt water.

In addition to the traditional multi-colored sonar display, the echoMAP 73sv includes the spectacular DownVu scanning technology. The down-scanning capability provides monochromatic images of anything lurking beneath the water. Though available on competitor versions, Garmin devices remain unmatched for the crispness and clarity that the DownVu imaging provides. Equipped with SideVu, anglers also have the opportunity to get similar images of what lies under the water on either side of the boat at distances spanning up to 750 feet away.

In an instant, the images received effectively distinguish between balls of bait fish, game fish, vegetation and obstacles. See where the fish are hiding and at what depth. A built-in sensor also displays vessel speed and water temperature. The device additionally records and saves scanning information, which allows for backtracking and review. The split-screen feature provides a variety of display combinations whether desiring to see high and low frequencies simultaneously, charts and sonar or traditional images with DownVu or SideVu side by side. When looking to upgrade to a more powerful and accurate fish finder, the Garmin echoMAP 73sv is a viable option. You can get a great deal on Garmin echoMAP 73sv here.

My new 70dv is a superb fishfinder. The target separation is in the traditional sonar mode is much better than other units I’ve had. The down image detail is also unmatched – the unit will even show you the difference between murky surface water and clear deep water. It also keeps the bottom better than any other unit even at high speeds of over 30mph. I’ve been using it for a few months and I can’t find anything wrong with this unit.

I have used this unit on several outings now and am not impressed. Everything works but I guess I expected more from it judging by the glowing reviews the less expensive Garmin echoMap units received. The screen is nice and sharp but washes out in the sun making it difficult to make out detail. It will pick up bait fish schools pretty consistently but doesn’t seem to show much in the way of fish symbols aside form a ton of yellow dots. This is true even when my Humminbird shows larger fish in the area. I thought maybe I was just not reading it correctly, so I called Garmin to ask if they had a DVD or something that could help me interpret the symbols on my screen correctly. All the customer service representative did was tell me to check YouTube. That ended up being no help at all. I started noticing that the depth readings varied between the numerical readout and the graph by up to 5 feet in some areas. Not sure what would cause this. I do like the spilt screen where I can run down view and fish finder at the same time. The onscreen battery indicator is also a nice feature. Like I said the unit works alright and I would probably rate it higher if there was better support information for it. As it is right now, I can’t see myself shelling out this much for what I ended up with if I had it to do over.

I took my time and went through all of the display models in the store. And let me tell you. The screen size is what counts. I was able to choose a view without the annoying data bar that covers the screen taking away from the view. The others did not have this simple feature and lost out when I found this. Also you can display traditional fish icons with depth by tapping the power button for “Quick menu”. Very well made.

The 73 SV was a good unit but not very easy to use for a non tecky. I was just getting to know it on the third trip out when it flashed a message about the back light and died. Getting help is almost impossible. SO disappointed .