Garmin Striker Plus 5cv has an average rating of 5 out of 5 based on 1 user reviews. 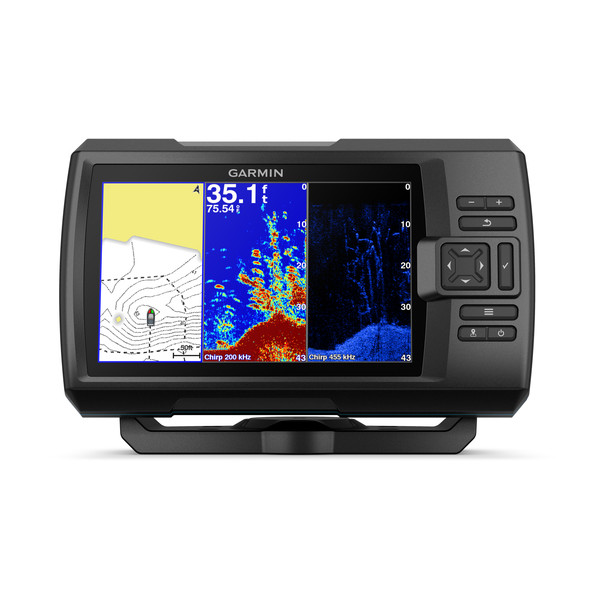 Garmin introduced the Striker Plus series as an upgrade to the older Striker series. It has new tech and features but is even more user-friendly to make catching fish even easier. The Striker Plus has features designed to take full advantage of the built-in GPS, including Quickdraw Contours and Wi-Fi , that both extend the ability of former models to encourage new-tech upgrades, yet appeal to first-time users who’ve never used GPS fish finders before. The Striker Pro models are perfect for both entry-level anglers and veterans with improved sonar and the ability to create and store your own contour maps.

Garmin’s new QuickDraw technology is one of the major advantages over the older 5cv, which didn’t include the capability for detailed mapping. The new technology more than makes up for that shortcoming. Garmin’s new mapping software is called QuickDraw Contours, built into the Striker Plus and ready to go. It allows you to map bottom contours to 1-foot intervals with a unit data storage capacity that can cover an impressive 2 million acres, big enough for the largest lakes. It can automatically create contour maps so you can review where you’ve already been and start planning your next trip. QuickDraw is very easy to learn and use, with no special training or experience required.

Both the old and new 5cv models let you mark waypoints, create routes, and get a consistent read-out on your boat’s speed. The speed indicator is a great tool for monitoring your trolling speeds or observing limits in wake-controlled lakes. It will constantly track your location on the water with high precision. The built-in, high-sensitivity GPS finds and maintains your position anywhere you go on the water.

Unlike the previous 5cv series, Striker Plus includes built-in Wi-Fi. You can now share maps across multiple Garmin Strrker Plus devices if fishing with friends or partners. It includes the ActiveCaptain app. This free utility allows you to connect your Striker Plus with any compatible mobile devices. This makes it possible to connect with the ActiveCaptain website and upload or download numerous maps, both in waypoint routes and QuickDraw Contours maps.

This gives you the advantage of using someone else’s experience in fishing new areas, or discovering things you might have missed in your local waters. Like the older version, it’s also compatible with Garmin EchoMap devices.

The new Striker Plus Garmin model transmits at up to 500 watts (RMS), an improvement over older versions operating with a GT20 transducer at 300 watts.
The sonar on both series reaches depths of up to 2,300 feet in fresh water and 1,100 feet in saltwater. The 5cv uses a Garmin transducer at CHIRP (77/200 kHz) and CHIRP ClearVü (455/800 kHz)

The Striker Plus CHIRP sonar is dual-frequency, dual-beam 50/200 kHz dual-frequency, but upgradable to 50/77/200 kHz frequencies. The Striker Plus ClearVu CHIRP sonar produces a constant sweep of signals for even more accuracy, operating at 260/455/800 kHz. This gives you photo-quality but clearly separate, stacked images of the fish passing beneath your boat, as well as underwater structures and submerged objects. You still get the sonar history rewind feature in both Garmin series.

A bright, colorful WGVA 5″ display provides 800 x 480 high definition imaging. This presents you with crisp images even in bright sunlight, housed in a rugged, IPX7 waterproof design that can survive some bumps and hot sun but still perform perfectly.
The Striker Plus measures 7.4 x 4.5 x 2.1 inches and weighs less than a pound. This is the same size and look as the traditional 5cv, but marginally lighter.

A rugged fish finder for all environments and 12-volt systems, the Stiker Plus package Includes:

Regrettably, neither 5cv series comes with SideVu sonar, so your fish-finding is limited to what’s below you. With the additional capabilities of the Striker Plus, you’re also getting a step up in price, but less than you might think. It’s still very affordable considering what it can do.

The major difference between the prior and new units, apart from improved imaging, is the QuickDraw Contours mapping and the ActiveCaptain app. Between them, you’ll be able to put together quite a library of maps. This gives you the possibility of mapping entire lakes shore to shore. You’ll be able to catch more fish no matter where you go.

Garmin has been making GPS systems for years. Their products are known for ease-of-use, industry-leading technology, and sleek, compact product design.

The Striker Plus fish finder lives up to that reputation. It provides a great fish finder with new advantages over the standard 5cv series that help you to get even more out of every fishing trip. With Garmin technology, fishing is coming down to a science.

The striker plus 5cv does offer QuickDraw (which is cool but internal memory only) along with the gps but not WiFi as some have advertised. This Is only offered on the plus 7/9 and up. The manual downloaded from Garmin is for multiple units and even has a note stating this.

I did not look for or buy a unit for the WiFi or external card slot capabilities but for the features and price, so far I’m not disappointed.