How To Catch Muskie – Fishing Tips

Muskie are some of the largest and most elusive freshwater fish. They’re sort of legendary in that many fishermen want to catch muskie, but few seem to actually do it. This freshwater fish is native to North America, and is most common in the areas of the Great Lakes, the upper Midwestern United States, and Canada. So the most important tip to catching muskie is to fish in the right area. 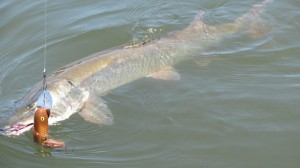 But there’s more to location than just the right area. Muskie seem to prefer clear waters, and a likely place to find muskie is the place where stained water meets clear water. Even better is when that stained water meets clear water near the mouth of a creek or river. Look for areas of green weeds growing in the water. Muskie can often be found lurking in weedbeds that are very close to deeper water. Rocky points in the water are also well-known hiding places for muskie, since those rocky points are a favorite hangout of bait fish. Remember, fish follow the bait and food.

There is no set time of year or day for catching muskie, although low light does seem to provide the better conditions. However, if you’re trying to catch larger muskie, spring is typically the best time of year for that. Smaller muskie are easier to catch in mid-summer and through the fall. Due to the fact that muskie have been overfished in some areas, there may be size limits in effect, so check with your local area.

The Best Tackle for Catching Muskie 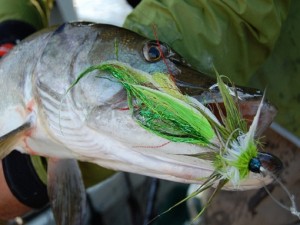 Now that you know where to fish and when to fish, you need to know the best tackle for catching muskie. Because of the muskie’s size, you’ll get the best results with a sturdy 7-8 foot heavy duty pole, combined with a 20-25 pound test line. If you use a wire leader, make sure it’s 75-100 pounds. A casting reel works best with these fish. They’re not content with lure or bait simply hanging there, and muskie want to be challenged. Some fishermen are favoring braided super lines that are thinner and don’t stretch as much, and avoid wire leaders altogether.

The right bait to catch muskie is as unpredictable as muskie themselves. Barbless hooks are highly recommended by most fisherman, as they are much easier to remove from the fish, and you’re less likely to stick yourself. If you want to use live bait, muskie prefer juvenile bull frogs and extra large minnows. If you’d rather use lures, then weighted jerkbaits, soft plastic lures, and crankbaits are your best bet. During the spring months, muskie go after smaller prey, so make sure you use a smaller lure. During the fall months, muskie go after larger prey, so you’ll want to use a larger lure. And by larger lure, we mean significantly larger. Muskie have been known to eat other fish, ducklings, and muskrats.

A tried and true method for catching muskie is trolling. Faster trolling tends to work best for catching muskie, so keep the boat speed somewhere between 4 and 6 miles per hour. Don’t try to fish too deeply, as muskie will often come up to bite, but will rarely dive down deeper into the water to grab the hook. Also, keep the bait pretty close to the boat while trolling. Muskie are not fearful fish, and will often come right up to a boat. There’s no need to try to cast the line more than 20 feet out from the boat. If there’s more than one person in the boat, you can all use the same lure, and cast your lines the same distance from the boat, and troll that way. This tricks the muskie into thinking there’s a school of fish, and they won’t be able to resist the temptation of easy food.

No Need for a Fishfinder

While other fish can be found with the help of fishfinders, the same is not true of the muskie. Muskie don’t have a particular preference for water depth or water temperature, so mapping out the water isn’t particularly helpful with catching them. As was already stated, the one constant for muskies is that they like weedy areas, so those are the best locations to start fishing.

Fishing for muskie requires a great deal of patience. Muskie are notoriously difficult to catch, but that’s part of the attraction for fishermen. With these tips, you’ll be able to join the ranks of the fishermen who have hooked the elusive muskie.