Humminbird Helix 7 CHIRP G2 has an average rating of 5 out of 5 based on 1 user reviews. 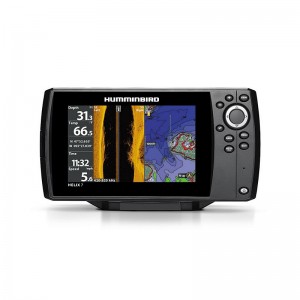 The Helix 7 Sonar units offer the first generation DualBeam PLUS Sonar and SwitchFire Sonar features. In DualBeam PLUS, the two frequencies available are the traditional 200kHZ for shallower depths less than 800 feet, and 83 kHz for depths greater than 800. 2D Sonar can be used at either 83 kHz or 200 kHz, or both 83/200 frequencies melded into one display. The narrow 200 kHz beam extends out to 20 degrees and is optimized for excellent bottom detail to reveal fish hidden in bottom clutter. The wider 83 kHz beam extends out to 60 degrees for greater coverage of target fish and bait fish. The 83/200 DualBeam allows you to discover fish and structure in an area as wide as your depth for the most complete picture viewed as split screens. You can also zoom the 2D sonar view between selectable upper and lower depths, viewable as split screens. The SwitchFire Sonar feature adjusts the signal filtering, allowing you to view sonar returns in either Clear mode where clutter is filtered and the reflected sonar provides more object details with greater fish size accuracy, or else in Max mode where all the raw sonar data from the reflected transducer beam is displayed for more fish arches and better jig tracking.

CHIRP technology, originally developed by the Navy, stands for Compressed High Intensity Radar Pulse, and uses rapid fire pulses in a range of frequencies. Different objects such as fish, brush piles, or plankton reflect differently at different frequencies. Sonar units with CHIRP technology can then compensate for the differences in the reflectivity of objects and materials as they reflect pulses. With CHIRP it’s possible to get target separation as small as 2″, which is important for vertical fishing. Image clarity as well is important for ledge fishermen, where the improved clarity enables you to distinguish a school of perch from a school of white bass, or differentiate large shad from small shad. Lastly, CHIRP sonar used in offshore fishing allows you to distinguish predatory fish such as bass or stripers from inside balls of surrounding bait fish, or beneath the bait fish. Five additional CHIRP frequency modes are available with the purchase of an optional transducer: Low (28-75 kHz), Med (75-155 kHz), High (130-250 kHz), 83/200 (75-155/130-250 kHz), and 50/200 (28-75/130-250 kHz), operating to a maximum depth of 2500 feet.

The Helix 7 CHIRP DI G2 units offer CHIRP Down Imaging and DualBeam PLUS sonar with 4000 pk-pk power output. The standard transom-mount transducer included offers two CHIRP frequencies: 455 kHz (420-520 kHz), and 800 kHz (790-850 kHz) to a maximum depth of 600 feet. Down Imaging shows the total sonar echoes received by the transducer from the bottom contour, structure and fish, illuminated by a thin front/back transducer beam that extends far out to each side.

The Helix 7 CHIRP SI GPS G2 unit offers the full arsenal of sonar technologies — Side Imaging, Down Imaging, and SwitchFire Sonar. Side Imaging differs from Down Imaging in distinguishing between bottom contour, structure and fish on right and left sides of the boat. The included transducer supplies three CHIRP frequencies: 83 kHz CHIRP (75-96 kHz), 200 kHz CHIRP (175-225 kHz), and 455 kHz CHIRP (420-520 kHz) for a maximum depth of 1500 feet.

The G2N networking option works with the GPS feature used in navigation and chartplotting. The GPS chartplotting has built-in Bluetooth, and with the purchase of Ethernet adapter cables, Ethernet networking capabilities allows users to share waypoints, tracks, routes, GPS position information, and sonar information, but not maps. The built-in GPS and chartplotting capabilities include 2500 waypoints, 50 routes, and 50 tracks with 20,000 points. Humminbird Mapping, Navionics+, Navionics Platinum+, and PC Connect are optional features with GPS units. You can get a great deal on Humminbird Helix 7 CHIRP G2 here.

This is an excellent fishing tool. I use side imaging to look for schools of bait fish, structure and places fish might hang out. Then I use the regular sonar to locate the fish in those places. This sounder is very customizable, every aspect of the sonar can be adjusted and tweaked. You really need to take time to understand the features and learn to read the screen (especially the side image view) to get the most out of this graph. I’m very impressed by how much insight I can get from this unit.