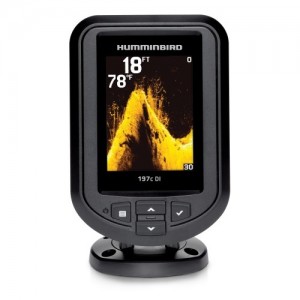 Using precision sonar, the Humminbird PiranhaMax 197c DI makes aquatic environments as clear as day. The fish will never rest easy again. A compact device measuring roughly 5.6 by 3.9 inches on the front and just over 1.3 inches deep, the new PiranhaMax features a 3.5-inch LCD monitor with 320 by 240 pixel resolution. Combined with 256 hues of color, the LED-backlit screen supplies an especially detailed picture to show just where the fish are biting. To make the device easier to operate under all circumstances, a gimbal mount is provided that allows the unit to be rotated and tilted. It can also be in-dash mounted. Using 10 to 20 volts DC with 220 mA supplied by the boat, the unit generates an average of 300 watts of energy that reaches a peak-to-peak output of 1,600 watts.

The 197c DI is capable of generating two distinct sonar beams emanating from a transducer secured below the water line on the transom of the boat. On this particular unit, the narrower beam forms a 16 degree cone. This beam is designed to supply sharp details of items right beneath the boat. Another beam at a frequency of 200kHz is created simultaneously. This beam has a cone angle of 28 degrees. With this wider, deeper span, it can include more objects but at a lower level of detail because current disturbances and stirred-up silt are more likely to be captured.

Once the sound waves reflect back to the transducer, the Humminbird PiranhaMax 197c DI translates them into a visual animation. Each sonar pulse is turned into a narrow vertical plane that’s displayed on the right-hand side of the screen. As the planes are layered next to each other, a representation of the underwater terrain is produced. Essentially, it’s an image someone could see viewing things below and behind the right side of the boat. With its Dual Beam Plus capability, this fish locator can show the results of a single beam, both in a split-screen configuration, or both merged in a single image with closer objects appearing in orange and background objects colored in blue. When displaying images, the fish locator also provides a fish ID feature that distinguishes fish from other objects in the water. In addition, water temperature is built-in the transducer. The PiranhaMax 197 comes in 3 versions: 2D sonar only, 2D and down imaging, and the portable (non-DI) with carrying case and a suction cup transducer. You can get a great deal on Humminbird PiranhaMax 197c DI here.