The Icom M422 has a larger face and elongated display compared to its older siblings.

Pushbuttons are arranged in two parallel rows under the display screen rather than placed around its perimeter. 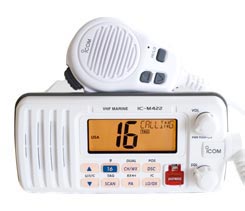 The M422 display is longer but not quite as high as the older M402-series radios, but it does cover a bit more area. Backlighting is improved with 7 levels of control.

Two characters have been added to the display for position and channel comments making a total of seven. Still long data strings scroll across the screen rather than display onscreen in their entirety.

Easy viewing, alpha character display, numerous icons, and the previously mentioned improvements garnered a good rating from us on the M422 display screen.

Performance of the M422 was at the top of the heap of comparably priced vhf radios. Transmitter power was stable throughout testing, with frequency stability rated good and receiver sensitivity excellent. Receiver selectivity is specified at greater than 70dB, very high for a mid-priced radio. The internal audio system output, at 95 dBA was the highest of any radio in its price range.

This Icom VHF marine radio has all the features, controls, and designated pushbuttons found on the older M402-series radio, plus a couple extra buttons to control a hailer and select local/distance on the receiver.

In congested harbors with lots of VHF radio traffic a receiver can be overwhelmed with signals, by setting the radio to local the receiver will cut out most of the distant weak signals and provide better reception of the stronger nearby signals.

DSC capabilities on this Icom VHF radio are more extensive than any other unit we tested in this price range. It has the ability to make distress, individual, all ships, group, position request, position send, geographical, polling, and polling request calls.

Icom has taken the external speaker connections and made them hailer capable, this gives the Icom M422 hailer capability with 4.5 watts of power.

This Icom VHF radio has the ability to use an Icom remote microphone.

The M422 is a popular mid-priced VHF with typical superior Icom performance. It carries a 3-year warranty.