The Lowrance HDS-5 we tested had an internal Broadband Sounder ™, internal GPS receiver, and was preloaded with Lowrance Nautic Insight ™ U.S. Coastal cartography.

Compare Best Pricing on Lowrance and Other Combos.

Cartography options include Nautic Insight (coastal), Lake Insight (inland lakes), or a Navionics world base map. The Lowrance HDS-5 has a single chart-card slot and can use Navionics Platinum and Platinum+ charts as well as any Navionics inland lakes cards.

We measured the Lowrance HDS-5 case at 5.8-inches high by 7.1-inches wide and just under 3.3-inches deep. 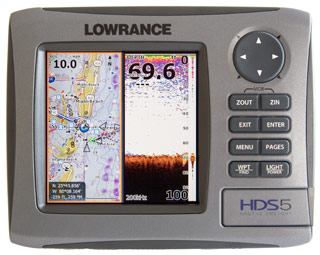 We used the accompanying gimbal bracket to mount the Lowrance HDS-5 to our test rig.

A removable front bezel makes for easy panel mounting without any additional hardware other than the appropriate mounting screws.

When connected to these optional devices, the Lowrance HDS-5 can display Sirius weather and radio, or even engine gauges. A single cable that fastens to the case back with a twist-lock connector supplies power and NMEA0183 data through individual legs.

The onboard NMEA 0183 interface supports data transfer rates of up to 38,400 baud. This unit can also interface with a NMEA 2000 or Navico Ethernet network.

The HDS-5 is equipped with a 3.6-inch wide by 3.6-inch high display screen that measures 5-inches on the diagonal and carries 480 by 480 pixels of resolution. 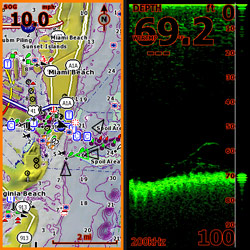 The Lowrance HDS-5 is display screen is bright, sharp, and generally easy to read.

Sometimes however, especially on the chart page where there is lots of information displayed, you’ll need to get up close and personal to view all the detail that appears onscreen.

When viewed straight-on the screen maintains its brightness whether or not the user is wearing polarized sunglasses. Even at steep side angles I noted no darkening or reduction in readability.

I rated this Lowrance excellent for daylight viewability. No screen fogging was apparent in the display at anytime.

The Lowrance HDS-5 has both a day and night color palette. The night palette changes numbers and letters shown onscreen to a darker color for easier night viewing. On the sounder page, the colors invert for enhanced low-light viewing.

Page screens and page combinations are set using the page key, keypad, and enter key. The user can select from one of five main pages, Chart, Sonar, Steer, Waypoints, and Info.

Combined pages can be shown in two windows. Control is switched from one window to the next by holding the page key.

I liked the slick appearance of the page menu interface; it was fun and easy to use.

Page specific menus are available for a number of pages including the chart and sonar pages.

When the menu button is pressed once, the corresponding operations menu for that page will appear onscreen and give the user a number of common used options. A second press of the menu button brings the main menu onscreen.

Compare Best Pricing on Lowrance and Other Combos.

A waypoint is built at the boat or cursor position easily with a double press of the waypoint key. Once created, you can select the waypoint and edit the waypoint name, position information, symbol, and color. You can also add a comment, record the depth, and set an alarm radius around the point. All this added information can come in very handy when you have lots of fishing spots in close proximity.

You navigate to a waypoint by selecting it from the chart page or waypoint list. Once executed a line to the waypoint is drawn onscreen from your present position.

To actually navigate the boat to the point I choose the chart page view combined with the steer page view to be displayed onscreen. This gave me numerical and graphical directions to the point.

Waypoints are identified with one of 70 symbols and one of 7 colors. The HDS-5 can store up to 5000 individual waypoints.

Routes are created from the chart page. To begin make sure the chart is the active page then hit menu. On the chart menu one option will be ‘New Route…’. Pressing it brings you back to the chart page where you’ll see an ‘Edit Route’ note at the top. Waypoints can be added simply by placing the cursor and hitting the enter key. Pressing the exit button when you’re finished adding point prompts you to save the route. I found it very easy to build a multipoint route in just a few seconds.

Routes are listed on their own page where each point on the route is listed with bearings and distances between each. Route waypoints can be edited here too. The HDS-5 can store up to 200 routes with as many as 250 waypoints in each one. 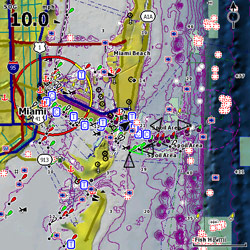 Onboard cartography was very detailed and included shaded relief that added a 3D effect.

The man overboard function of the HDS-5 is activated by pressing both zoom keys simultaneously.

At that point no matter what page you are on the unit switches to a zoomed full screen chart page view, saves the MOB position, and displays that position in the lower left corner of the screen with bearing and distance back the point.

As the helmsman you’d need to be able to steer to the MOB point with range and bearing information only. To get navigation data back to the point to display onscreen would require additional inputs.

I think the single action MOB function of the HDS-5 works very well. In my opinion, it provides enough navigational data for all but the greenest helmsmen to return to the MOB position quickly and precisely.

When ranging the chart on this unit out rapidly you’ll see the onscreen chart shrink in size with each zoom out button push. After a second or two the chart will redraw to the appropriate range. When ranging in the chart grows then rescales. It seemed to take slightly longer to range in. Still when using only the onboard cartography I found redraw speed of the HDS-5 to be adequate.

If you use the cursor to move off the currently displayed area the base map will show basic detail all the time but the details will take a second or two to redraw after you stop moving the cursor. Precise cursor placement with the keypad can be a bit clumsy. I found it took a little practice to place the cursor dead on a spot.

You’ll find three chart orientation options on the Lowrance HDS-5 chart menu, North Up, Course Up, and Heading Up.

Locating services, tide data, or other information is done by placing the cursor over the object of interest, then hitting the enter key. You can also use the find function to locate a specific object of interest.

One special object of interest I noticed on the HDS-5 chart page was the large number of fishing icons (fish symbol inside red box) scattered around the chart. When you point of one of these icons and display the information you’ll get an inside scoop of fishing knowledge for that specific area.

The Lowrance HDS-5 internal sounder uses Lowrance broadband digital signal processing to enhance sounder viewing. Output power is not a viable metric when comparing a Broadband Sounder to a conventional analog unit since the sensitivity of the broadband sounder is so high it uses significantly less output power. 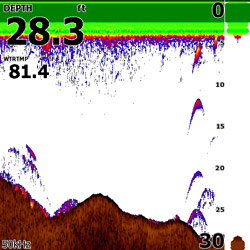 You can clearly see our three test targets on the right side of the screen at 7, 12, and 20-feet. The extra arches deep were fish in the area.

Standard features include auto and manual depth ranging, zoom, and bottom lock. The unit will also display water temperature when connected to a transducer with these capabilities.

Zoom can be turned off or set from 2x to 8x in single increments by using the range keys. The zoomed area is selected with the cursor pad. This is a very powerful zoom function when compared to other combo units we’ve tested.

Sounder data can be displayed full screen or in a variety of split screen combinations. During our testing the Lowrance HDS-5 sounder marked all three of the submerged targets we placed in the water well in auto gain, but to get a more refined sonar image I adjusted the unit sensitivity down 3% in the automatic mode.

Overall I’d rate the Lowrance HDS-5 sounder good for both presentation and ease of use.

Back to the HDS-7 review.

Buy this Lowrance with any mapping or transducer options you want right here.

The HDS-5 package can be purchased in a number of configurations and with a variety of cartography and transducer options, make the right choice before you buy.

Choosing a GPS chartplotter that is right for your and your vessel.

Choose the best fishfinder for your boating, sailing or fishing needs…read more.

The Lowrance Elite-5 is a combination chartplotter fishfinder that couples a 5-inch display screen, 16-channel GPS with internal antenna, and 500-watt sounder into read more.

The Standard Horizon CP190i is built around a bright crisp 5-inch display screen and features a built-in 50-channel GPS sensor. It also comes with preloaded cartography.

The Garmin 546s combines the capabilities of a high-sensitivity GPS receiver, mapping chartplotter, and 1000-watt internal sounder into a single unit.