Lowrance Hook 5 has an average rating of 2.4 out of 5 based on 5 user reviews. 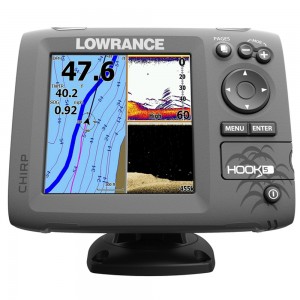 The new Hook 5 by Lowrance is part of their new Hook line of fish finders designed to cater to anglers of any budget. The Hook 5 is a combination fish finder and GPS chart plotter developed for anglers wanting a great value, but who are not willing to sacrifice on quality. It delivers on both counts with features generally only found on units costing significantly more money. The Hook 5 fish finder is a 2016 upgraded version of the very popular Lowrance Elite-5 HDI released in 2013.

Lowrance took all the features that made their Elite-5 HDI fish finder such a resounding success and improved on both its simplicity of operation and performance. The new Hook 5 has a crystal-clear five-inch display screen, measured diagonally, where you can view GPS charts, traditional sonar and DownScan sonar.

The new Hook 5 display provides a sharp 800- by 480-DPI resolution that produces vivid 16-bit colors. The Hook 5 runs on frequencies of 455/800 kHz for DownScan sonar imaging and 83/200 kHz frequencies for traditional sonar.

Lowrance upgraded both the menu and control buttons from the Elite-5 HDI, making the new Hook 5 unit much easier to use. This allows you to switch between all three screen and all features with just one finger, a highly useful feature when you are trying to compare data from GPS points and sonar. Other features include:

● Insight Genesis custom mapping software allowing you to create your own detailed maps of your favorite fishing holes from your own sonar logs.
● Advanced digital Signal Processing, or APS, that cuts down on the need to manually control settings to locate fish or see structure in precise detail.
● TrackBack Map History that allows you to review and chronicle sonar map histories of structure and transition areas and pinpoint way-points from previous passes or fishing trips.
● A multiple-window display allows you to easily select several preset page layouts.

Perhaps the most significant upgrade is the addition of the “CHIRP” sonar that sends out pulses of sound in a fan-like pattern, so there are a lot more echo returns for the transducer to pick up. The redesigned software then analyzes the readings to provide you with a clear picture of the fish’s world.

The new CHIRP sonar is a giant leap forward in fish-finding technology, as just a few years ago it was so expensive it could only be found on commercial fishing systems. Now that the CHIRP technology has come down in price the consumer-fishing experience has dramatically improved.

The new Hook 5 uses a highly sensitive GPS antenna that is able to precisely map and overlay your position on the display. The new software provides highly-detailed maps with over 3,000 lakes, rivers and coastal areas with contours up to 1,000 feet deep.

Even though the Hook 5 standard mapping system is more that adequate for virtually all fishing applications, the mapping software is easily upgraded via the MicroSD card slot. Some of the available chart software upgrades that are compatible with the Hook 5 include:

Aside from the new upgrades, all of Lowrance’s basic features are included on the Hook 5. Some of these features include the ability to:

Overall, for all the pros the Lowrance Hook 5 has, perhaps the only drawback is battery life, which could be a little longer as you will need to switch or recharge the batteries for multiple-day excursions. Still, for all the features it provides anglers at this price point, the Hook 5 is at the leading edge of fish-finding technology. Used properly, the Hook 5 can make a tremendous difference in your ability to find and catch all species of fish in all kinds of water and any type of structure. You can get a great deal on Lowrance Hook 5 here.

The Hook5 is an excellent piece of equipment, but the instruction manual that comes with it is a piece of @#@$$@!!! It is practically worthless after you make the initial setup. It might as well have been printed in Russian.

This was a gift for my husband. He may have gotten to use it a dozen times over the past year as he works full time and doesn’t get to fish that much. We thought for the money we paid it would last for years. There are fishermen that use these daily. Maybe we got a bad one, a lemon. It’s not working at all and it was taken care of. It won’t power up and there is juice coming through. Out of warranty but for a couple hundred dollars they will replace it. Disappointed, thought we bought a quality product.

The owners manual sucks. It is not written for people to understand how to program it. I did not choose it, as it came with the Suntracker Package.

Some day some one will realize that old people who fish are not professionals but we who just like to fish and need some guidance. I do not recommend this unit.

I agree with Mr. Fox, great unit but the user manual and start up instructions are totally useless. AND the people at 1-800 tech support are worthless. You just gotta take it out and fiddle around with the menus and features. One thing that irks me is having to accept the disclaimer screen every time you turn it on. I’m sure the Lowrance legal team designed that feature. And lastly, come on Lowrance built in a swivel feature and don’t make me add one at my cost. Other than that GREAT unit.

I purchased a boat geared with two of these units. One on the dash the other on the front deck. Lowrance has always been my choice for sonar. I’m sure this unit fits the reputation of Lowrance. However, I don’t know. The instruction manual is do-do and sucks. I think the manual person at Lowrance should be fired. They probably know this unit inside and out or not at all. The directions are useless and I’m so frustrated with the unit that i am replacing them with something i can figure out.

This is by far the worst fish finder I have owned. The fish ID on the screen are like specs of salt. Over 5 MPH and I lose the screen even though I have moved the transducer three times and followed all advice from tech support. Speaking of tech support, their email service likes to just send you around in circles. I was able to call OK but I needed to get bumped up to a supervisor to find out I will never be able to see the fish on the screen My Humminbird on the same boat worked perfect but I wanted to add GPS and bought Lowrance on their reputation. I hope this review helps someone.