Lowrance Hook 9 has an average rating of 1.5 out of 5 based on 8 user reviews. 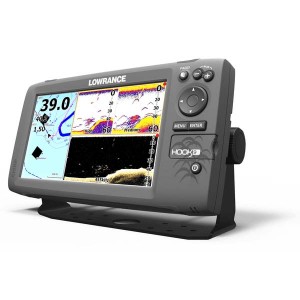 The Lowrance Hook 9 is an advanced fish finder intended for use by serious fishermen who want to increase the likelihood and size of a catch, as well as reduce the probability of fruitless casting or catching fish too small to be kept. It is a dedicated fishfinder that is lacking in some of the navigational aids found on other units, but because it is dedicated and focused on providing information regarding the presence of fish, it is superior to many general or mixed-purpose units. At an MSRP of $549.99, it is in the mid-range of fish finders, making it an excellent option for those looking to get more serious about fishing without making a significant investment. Its ability to accept most brands of transducer also means that it is not necessary to stick with a Lowrance branded transducer, making it ideal for those who already own a transducer and are looking to upgrade, or who will be buying or renting craft with transducers pre-installed.

The Lowrance Hook 9 is built around a very bright 9″ LED screen, intended to be visible even in very bright sun conditions. Powered by the boat’s electrical systems, it is water resistant and uses a button-based system. This ensures the unit will be operable even when using gloved hands. The screen’s display can be customized to show many options such as the boat’s current position, the results of the most recent sonar pings, and lake or ocean bed conditions. All three can be viewed simultaneously, or a large single image can be displayed instead. Transitioning between the screens is accomplished by a single button press.

The core sonar component of the unit is very high quality. Thanks to Lowrance’s years of experience, the sonar images are very clear, especially the downscan, which is often accurate enough for fishermen to be able to determine the presence of reefs, cliffs, sunken structures, and timbers. This not only enables fishermen to gather a good estimate on where fish are likely to hide, but it also enables them to avoid losing lines, rigs and lures on sunken hazards. However, the Lowrance 9 does not have an active front-facing sonar transducer setup, meaning that it cannot be used to avoid navigational hazards unless the vessel is traveling very slow.

The sonar system updates its image continuously, providing new information as it exists. The update rate is sufficient for trawling at slow and moderate speeds, as well as giving a general idea of the aquatic terrain during transit. The base model does not actively update the GPS location of the craft, however by installing the Navionics + and Jeppesen C-MAP MAX-N upgrades it can serve as a navigational aid. Some users may find that a dedicated nautical GPS may be more accurate, however, since without such upgrades one can only determine the boat’s current GPS position, rather than track it over time or use the unit to get directions.

The system has thousands of charts including over 3000 lakes and all US coastlines up to 1000 feet. Additionally, the “Trackback” technology allows sonar data to be integrated into and laid over existing maps, enabling fishermen to create their own lake or ocean floor maps for later reference. This enables fishermen to easily and quickly return to their favorite or most successful fishing spots, as well as eliminate areas that have proven fruitless in the past. The Insight Genesis system enables these maps to be created and updated automatically, and fishermen can quickly map and store their favorite fishing spots.

The sonar software has a large number of options to enable it to make the most of the data it receives from the transducer. By telling the computer the approximate depth and common water conditions, it can more accurately determine the location and presence of fish. The unit is accurate up to 1000 feet and can be adjusted to meet a multitude of conditions, including ice fishing. The software is capable of automatically detecting a transducer’s capabilities and only displays those settings the transducer is capable of. The clarity of the image is so high that fishermen can see the presence and depth of their line and lure or bait in real time.

Data from the transducer is displayed in full color, with contrast provided to improve readability. Fish are easily identified as arches, with the size and thickness of the arch corresponding roughly to the size and length of the fish. The system is very intuitive, and even fishermen who are not very tech-savvy will have no difficulty operating the unit and getting useful information by sticking to the most common factory presets.

Onboard data can be updated via a MicroSD card (not included). Additionally, stored data can be backed up and removed for archival purposes. The MicroSD card also serves as a means to update the software, install software upgrades, and provide new maps. The use of this removable card eliminates the need to remove the unit to keep the unit up to date. Most optional upgrades are software-based and do not require the purchase of additional hardware.

To sum up, the Lowrance Hook 9:

However, it lacks in some areas, such as:

All in all the Lowrance Hook 9 is a solid mid-range model ideal for serious fishermen who want a high-quality unit but who do not want or do not need certain expensive advanced features. It is an excellent unit that will certainly increase one’s catch and also help find and catch fish more quickly and reliably. Due to its limited navigational abilities, it is most useful to those who fish the same areas routinely and are familiar with them, although it will certainly increase the catch of those who take it into unfamiliar waters. You can get a great deal on Lowrance Hook 9 here.

Very disappointed with Lowrance. This unit seemed like a great value but in reality it’s a very poorly designed product and doesn’t perform very well. The maps freezes frequently and the processor is very slow. A cheap piece of junk.

From the minute I installed, it freezes up randomly, creating a dangerous condition. That is with the latest 2.0 7.0 10.0 software update too. The only way to unfreeze the unit is to unplug the power cord. Many, many reviews on other sites say the same. I wish I had done the research.

Posted by Ted May

I thought I was upgrading my x28 to the Hook 9 . I never had issues with my X28. The processing speed of the x28 is ten times faster than the Hook9. Loosing bottom tracking above 25 mph. Screen map goes blank when zooming for five to ten seconds.Older X28 skimmer transducer is twice the size of the cheap thing on the Hook 9. So disappointed on buying this thing.

I really like the unit, I have no problem with the it. It works perfectly fine for me.

Posted by Sad I bought it

This unit freezes up constantly and restarts on its own. Wish I never bought it. In order to deal with the freezing the unit must be restarted.

Same here. This unit freezes up from day 1 and must be disconnected to reconnected for it to even reboot. Very frustrating. When it does “work” it is extremely slow whenever you try to zoom in and zoom out or do other things with it (processor) I emailed Lowrance in regards to this issue. This is definitely something that they should own up to and rectify with customers.

I bought a Hook 9 in 11/17 and it really didn’t work well from day one but kept hoping it would. Now the screen once powered up goes in to a black screen and won’t open.