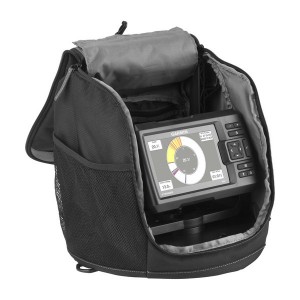 Gone are the days when ice fishing meant one or two people sit huddled in a small shack, staring vacantly at a hole cut into a frozen pond, simply waiting for the fish to bite. With the Garmin Striker 5 Ice Fishing Bundle, you are now able to take the offensive in a traditionally passive past time. Generally, the most difficult part of ice fishing, aside from passing the time between bites on the line, is identifying where is the best place to fish. Obviously, with the water frozen over and you sitting atop it, there is no real opportunity to cast a line, and your ability to entice the fish with subtle rod work is minimized by the small hole cut into the ice and only being able to work along the vertical axis.That is where Striker’s CHIRP transducer becomes a godsend. The transducer takes all the guesswork out of locating the fish, so all you have to do is find the right location—with the transducer’s help—and wait for them to bite.

The CHIRP transducer works along a sonar mechanism whereby it sends out radio waves along a spectrum of frequencies and uses the returning radio waves that bounces back from fish to locate your targets. Moreover, the transducer utilizes a range of frequencies, both low “pitched” and high, to best help locate your prey. Essentially, high pitched frequency radio waves will more clearly and powerfully respond to obstacles—in this instance, the fish—to provide a clearer picture of where they are. However, it is the lower pitched, lower energy frequencies which provide the edge in locating fish in the first place. The lower frequencies may be a bit more diffuse and prevent as clear a targeting dynamic, but they are also able to travel further through the water, having not been absorbed and refracted along the way. Utilizing both high frequencies to pinpoint the fish that are nearby as well as the lower frequencies to identify the areas where fish may be congregating further away, the CHIRP transducer is a valuable tool in your box to help triangulate where exactly you should cut the hole in the ice and place your fishing shack.

Of course, locating the general region that fish are to be found is only part of the process when finding the prey for ice fishing. From that point, you need to know where along the vertical axis the fish currently are to best catch them. Part of this has to do with simply making the bait an easier target for the fish, but an experienced ice fisherman knows that the depth of where the fish are to be found has more to do with the water’s temperature. When lakes freeze over, the free-flowing water underneath does not remain in a single homogeneous state. There are variances in the temperature underneath the ice that are affected by a whole host fluctuating factors. The presence of underwater vegetation, underground springs feeding the lake, the difference in temperature above the ice compared to below the ice, and others all coalesce to create an environment to which the fish instinctively respond.

Of course, even with years of ice fishing experience, the ice fisherman is not a fish and immediately knowing how these various elements are affecting the fish’s environment can be difficult to parse. This process can be made even more difficult to determine when there are numerous different species of fish you may be targeting. However, the Striker comes through splendidly once again with a host of features that further provide an advantageous edge in the frigid battle of man against fish. The Garmin utilizes a radar-style split screen that can tell you not only where the fish are located, but the depths to which they are located as well with a circular A-scope depth scale and audible alarm. Furthermore, the software included in the fish finder allows the Striker to decode the size and shape of the fish from the radio waves received and provide a fish symbol ID to distinguish between different species. You can get a great deal on Garmin Striker 5 Ice Fishing Bundle here.