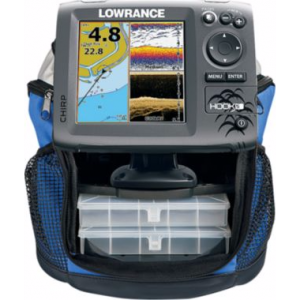 The Lowrance Hook 5 Ice Machine is a sonar-based electronic fish finder with a high-resolution five-inch LCD. It has been optimized for fish detection through and under ice, although it is entirely capable of detecting fish year round. It has a built-in GPS system that contains data for over 3,000 lakes and rivers, as well as coastal contours out to 1000 feet. Additionally, the Insight Genesis software system within the device enables the operator to create their map, in the event the onboard map is out of date, not present, or the operator’s sonar determines a discrepancy in the data. Additionally, the sonar can be used to map and store underwater landmarks, obstructions, points of interest, and lucky fishing spots. Advanced Signal Processing helps reduce the need to adjust the sonar response to detecting fish and underwater structures, although the system has adjustable settings to enable anglers to further refine the sonar image. The TrackBack system allows a return to previous successful fishing spots, the marking off of unsuccessful ones, and can serve as de-facto navigation for returning to port when in unfamiliar waters.

The primary focus of the Hook 5 Ice Machine is for ice fishermen. Traditional sonar systems do not work with icy surfaces, either due to an inability to penetrate the ice or due to signal scrambling caused by the reflection of sonar pulses off the ice. Additionally, many units have components, most notably the transducer, which do not function properly in cold weather. The ice transducer on the Hook 5 is specifically designed to work even in sub-zero weather, as is the unit itself, which has been engineered using electronics specifically designed for cold weather use. Additionally, the unit has large buttons instead of a touchscreen, which is more optimal for use with gloves. This makes it ideal for ice fishermen and helps ensure that they will spend more time catching fish, and less time out on the ice.

However, the Hook 5 Ice Machine is designed for all-weather, year-round use. It meets IPX7 waterproof standards, meaning it will not be damaged by rain, splash, or a brief submersion should it go overboard. Its electronics are designed to withstand hot summer sun, although it should not be left in the environment indefinitely as it can be damaged by UV radiation over time. A sun cover is available to prevent damage if it is permanently mounted on a boat to be stored outdoors. It can operate with a connection to any 12V power supply and includes mounting gear to enable it to be attached to the front or side of most bass boats and small fishing craft. The ultra-bright screen is designed to be clear and present information accurately even in bright sun conditions and includes a dimming feature for night fishing.

The transducer cable is 20 feet, although it is not necessary for the cable to touch the bottom for proper scans and resolution to be achieved. The sonar has three different settings, HDI 50/200 kHz (Low/High CHIRP), HDI 83/200 kHz (Medium/High CHIRP), 83/200 kHz (Medium/High CHIRP) to enable anglers to get multiple scans in search of accurate maps of the lake floor. The map data is stored on a removable MicroSD card which can be updated as needed. Additionally, stored user-generated map data can be backed up to a home computer for safe keeping, or for later analysis. Optional high-definition chart upgrades can also be purchased and installed via the MicroSD card.

The Hook 5 is an excellent mid-range fish sonar, offering many of the options of more expensive units while omitting those that are not likely to be needed. Its use of a MicroSD card for data enables it to be future-proof, as does its ability to create and store user-generated maps for later use. While it’d be good if the unit were fully waterproof, it is waterproof enough for most anglers and capable of withstanding immersion should it be briefly knocked overboard. Its primary advantage is superior sonar resolution during winter months and through ice, although it is perfectly functional and capable year-round. It is thus an excellent unit for anyone who wants to only purchase a single device for year-round fishing. You can get a great deal on Lowrance Hook 5 Ice Machine here.