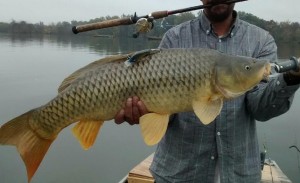 Carp are almost universally despised by environmentalists, ecologists, biologists, and aquatic life fanatics. Carp are invasive fish from the Black and Caspian Sea areas, and were introduced to almost every continent, sometimes accidentally, sometimes for farming purposes. Carp are disliked by so many because of their habit of endangering native species, due to the fact that they will eat almost anything.

This doesn’t stop anglers from fishing for these interesting fish, however. Anglers are some of the only people who can actually appreciate carp, as most others blame them for the extinction and endangerment of several other species. Any fish in the family Cyprinidae is considered a carp, and these fish are actually very close relatives of the tiny minnow. Carp are so common; it’s actually hard to find a country without at least a small population of carp. Carp will scavenge on the bottom, and almost never eat on the surface.

One reason that anglers like carp so much is because they can range greatly in size, and are extremely common. The largest carp ever caught, weighed, and recorded, was a shocking 94 lbs heavy. Imagine catching a fish that large! The monster of a carp was caught in France, in 2010. There are also several reports of these fish reaching well over 50 pounds, all over the world. The IGFA record is currently a carp over 70 pounds.

Carp actually have no stomach – instead of having one organ to store food, their intestine digests whatever they eat after they eat it. This means that carp are never really ‘full’ which is why many goldfish owners will admit to accidentally feeding their fish to death. They eat and eat until they can’t find any more food, have to sleep, or until they die. This combined with their lifespans that average at approximately 20 years can explain the ridiculous sizes that they can reach. Even still, with all this information, several fly fishers will talk trash about any angler who would target carp – though if they do, they should try catching a few themselves.

Carp have had a reputation as hard to catch since as far back as the 15th century, being described as having ‘armored mouths’, and some going as far as dubbing the fish as ‘evil’. Carp may not be the smartest, cutest, or cleanest fish out there, but when it comes to size and convenience, few can compete with them. 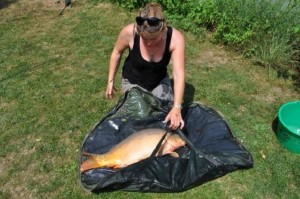 Most carp found in the United States are either mirror carp or leather carp. Both are typically greyish colors, sometimes with darker colorations and tan bellies. It is extremely easy to distinguish the two; However, as mirror carp usually have quite large scales. Leather carp have very few scales, with the concentration of scales near their dorsal fin if they have any at all. Both types of carp are pretty common around the world. Many types of carp have large stomachs, and commonly have stout bodies.

Let’s Locate: Common carp are found almost anywhere there’s water. As freshwater fish, they can be found in most ponds and lakes. Carp like still water or water with low movement. While carp have a relatively large range of environmental preferences, they most often populate brackish water and water with high turbidity. Plant life is a great indicator for carp, but few people know that you can also locate these fish based on other animals in the environment. Carp are known for following waterfowl, like geese, ducks, and swans. As shameless scavengers, carp will often share a meal with these birds. This information can lead into the first method of catching carp.

They Love Corn: Carp are omnivorous fish that are known for eating a wide range of things. One thing carp are notorious for loving corn. Adding corn to your lure, or even just looping a few above the hook can heighten your chances of catching carp by several percent. even just throwing a handful of sweet corn can make your carp fishing thousands of times easier.

Be Careful & Patient: Carp are notorious for their senses. They can feel very small vibrations, and almost always approach food cautiously. Carp will very commonly bump bait before they actually bite anything, so wait, be careful, and be patient.

Use The Right Hook: One thing to be cautious about is the color of your hook. Never use a shiny or reflective hook, because carp can see these from a long distance away. Using a brightly colored or shiny hook isn’t smart unless you have similarly colored bait.

Use Pellet Feeders: Attract More Carp: Another way to attract carp is to use a pellet feeder. These attract large amounts of carp, and small to large fish will go after the food.

They Never Bite Lures: One thing that you should know when trying to catch carp is that carp almost never bite lures. Fake fish simply don’t appeal to carp. As for live bait, you can use small fish, maggots, and nightcrawlers. Bread is the tried and true bait known for years as the simplest way to catch small to medium sized carp, and is an easy way to catch several carp fast.

Notice When Carp Bite: When you finally get a carp to bite, never let the line slack, as carp are infamous for spitting hooks or getting free. You’ll want to tire them out before you actually try and reel them in, because carp are strong but tire after a good fight.

Carp fishing is a true challenge, and though many look down at it and dislike carp in general, you can’t put it down unless you try it. If you aren’t afraid of challenges, are willing to wait a while, and are looking to catch a significant sized fish, carp fishing is definitely the way to go.

Nice video. Thanks for that. We have European Leatherback Carp here in Southern Africa. Not many freshwater anglers know how to fish properly for them.