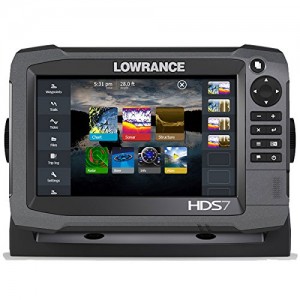 The Lowrance HDS 7 Gen3 is a fishfinder GPS combo designed for serious fishermen looking for a high-quality unit for use in fresh or salt water. While it is limited to sport fishing and doesn’t have the sorts of options a commercial fisherman might want, it nonetheless offers much more information in a much tighter package than other less expensive units. The result is a product that is ideal for serious fishermen but may be too expensive and complicated for the casual weekender.

Although packed with features, the Lowrance HDS 7 Gen3 is designed to be as easy to use as possible. The touchscreen is backed up by buttons on the right, which makes it ideal for those who will be using it while wearing gloves or during winter. It is fully waterproof, meaning that rain or even going overboard will not destroy the unit, although it is advisable to keep it covered or remove it for storage. The intuitive software is designed so that even someone who does not read the manual can use it right out of the box, although it is necessary to read the manual to understand and make use of the system’s higher functions. Additionally, since the Lowrance HDS 7 Gen3 is compatible with most transducers, it is not necessary to purchase or install a new one of an existing model is already installed.

Lowrance has been building recreational grade fishfinders for over 30 years and has invested heavily in improving both the software and hardware involved. As such, the Lowrance HDS 7 Gen3 has some of the best software available, the StructureScan system. This takes the data produced by the transducer and runs it through a series of algorithms to produce the most accurate map of what’s under the water as is possible. It is paired with the standard CHIP scans, and both scans can be overlaid, enabling fishermen to both see what the floor looks like under their boat and see the location and nature of any fish that happen to be detected. Fish are displayed as arches approximating the size and shape, and their behavior and location are updated continuously.

The Lowrance HDS 7 Gen3 is designed to be easily mounted and used on any boat with a minimum of hardware installation, and this extends to the elimination for wires to enable it to connect to other devices. While it does require a DC power source and must be continuously plugged into a boat’s electrical system, it can wirelessly connect to HDS Gen2 Touch and HDS Gen2 multifunction displays for additional display or input options, which is ideal when multiple fishermen are using the same boat. Those not wishing to purchase additional screens can just use their phone and the Lowrance GoFree App. The system also has a LAN port for software updates for those who do not have wireless internet access.

The GoFree system developed by Lowrance enables users to upload and download one another’s maps, in addition to updating existing maps. This ensures that the data on the Lowrance HDS 7 is uniquely up-to-date since any data obtained by users can be quickly distributed to other users. Therefore changes in the bottom of any waterway or its contours quickly become common knowledge. Additionally, other apps for specific situations can be downloaded through GoFree, increasing the functionality of the device. Data thus obtained can be stored in the onboard memory or in one of two SD card slots, which can also be used to update or install new software.

As would be expected from a fishfinder of this price, the Lowrance HDS 7 Gen3 does offer navigational assistance and comes equipped with a high-quality GPS receiver and navigational software. This software enables the planning of routes and alerts the operator to potential hazards. However, it does not integrate with the transducer to alert the operator to underwater hazards. However, it is updated via the GoFree system and users can include their updates and also additional software can be downloaded to make it more functional. This enables the Lowrance HDS 7 Gen3 to be a reasonably functional GPS system, however, and while it may not have the functionality of other units, it is adequate for the needs of most fishermen. It comes equipped with Insight USA charts and is compatible with Insight Planner software for planning advanced routes.

The Lowrance HDS 7 Gen3 is compatible with a wide range of accessories made by Lowrance and others. Most are aimed towards providing navigational aid and weather alerts, although considering the cost of the device it is somewhat surprising that such features are not included as standard. In particular the absence of a weather radar connection or function, even via an app update, necessitates fishermen either buy accessories or carry around a weather radio. This isn’t the worst possible shortcoming, but at such a high price, one would think these options and upgrades would come as standard. The Lowrance HDS 7 Gen3 also has limited compatibility with accessories by other manufacturers, but that is to be expected.

The Lowrance HDS 7 Gen3 is a very high-end unit, as indicated by its price, but it is nonetheless a very good option for serious fishermen who need a serious machine. It comes with the most popular options and upgrades and requires minimal training to operate. It is easy to install, and its ability to update and customize its software to fit the needs of the user is a welcome addition, as is its wireless functionality. While the system could use bigger navigational software and it would be nice to have weather and other advanced features as standard, it is nonetheless a very good unit that most fishermen will find more than meets their needs. You can get a great deal on Lowrance HDS 7 Gen3 here.

What makes this fishfinder stand out from any other unit I used (and used a lot of them) is the display. It’s big and bright, no problems with reading in direct sunlight. And it’s a touch screen too. Definitely worth the high price tag.

I simply love this fishfinder. The touchscreen allows you to select the features and set the configuration quickly with just a few clicks which doesn’t seem that important when you play with in a store but becomes a huge deal when you’re out on the water. The case is waterproof and well built. The screen smudges easily but that can be cleaned with soft-cloth. I also love the Insight Genesis software, it’s great if you fish on lakes that don’t have charts. You can basically create your own depth maps of the lakes. Buy this unit if you can afford it, it’s not cheap.

I used my hds 7 touch 1 time and I love it. Fast accurate and easy to use. I recommend it. Look around for best price because the price varies from store to store and Internet!

You can’t go wrong with Lowrance HDS. The performance and features are much better than any other fishfinder. I had limited budget so I had to buy the HDS7. Gen3 is much faster than Gen2 and I like that they put back the buttons, you can operate it using the touchscreen or the buttons, your preference. My only complaint is the base maps – not very good for my area, I had to buy Navionics Gold upgrade.

This unit works flawlessly. I have it connected to my 3G radar and the autopilot. All I have to do is point the auto-pilot to the spot where I want to fish and the auto-pilot and HDS gets me there. I’m really impressed with this unit, especially how clear the output is with High CHIRP.

I’ve been using the HDS7 Gen3 for a few months now and so far I’m very happy. The unit is really fast, switches quickly between screens and when zooming in or out. CHIRP is a great feature, it gives you better target separation. The unit locks onto the bottom and it’s able to hold at higher speeds. Excellent unit.

I used to have HDS7 Gen2. I loved that unit and I decided to replace it with Gen3. I thought this was going to be an upgrade but it was a a total disappointment. Gen2 was faster and much more responsive than Gen3 despite the claims that Lowrance is making. I wish I kept my old Gen2 unit.

Posted by Jake the Snake

Outstanding unit. Tons of features for the price. Highly recommend. I went from Humminbird 899 HDSI to this unit. Love having the ability to set up my own viewing screens.

Very easy to use the only negative is that the 3d dosnt work as it should in salt water depth over 20 to 30 feet.