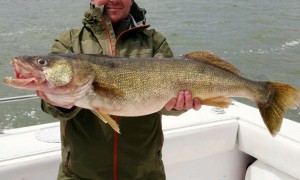 Walleye fishing is a great pastime for many American and Canadian anglers. Though not quite as popular as carp or bass fishing, a large amount of people enjoy this type of fishing; especially considering the fact that walleye are only native to the Western Hemisphere. Mostly found in Canada, the Great Lakes, and the Midwest, walleye have been introduced to almost the entire contiguous United States.

Walleye fish are often called yellow pike, though they are not technically pike at all. Walleye are very interesting fish, and if you plan to specifically catch them, you need to know a little bit about them first. 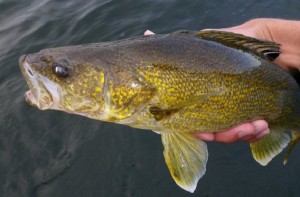 Walleye are ray finned fish, and are classified as perch. As the largest type of perch, walleye fish are very often found at two pounds and 15 inches long. They are typically a narrower, slender type of fish. The largest walleye caught was a record 25 pounds, caught in a calm Tennessee lake back in the 60’s. This shows the range of size walleyes can grow up to – they can grow more than 12 times the average size!

A typical walleye fish will have a dark green or olive color mixed with gold along most of its body, dark black splotches across the top and sides of their bodies. This coloration fades into their yellow-white stomachs.

Walleye fish  are very effective hunters – they have sharp teeth that they use to eat almost anything that they come across in their habitats. While this is good for anglers that can’t decide what to put at the end of a line, it isn’t so fortunate for the rest of the fish and creatures that walleyes prey upon.

Walleye is so widely sought because of its extremely recognizable and delicious taste. They are actually so sought after that many states have regulations based on the size of the fish – under a limit you may have to release any captured walleye, as well as over a certain limit in order to keep the primary breeding population intact.

Walleye fish hardly fend for the eggs during the ten days after they’re laid and don’t care for the baby fish after they’ve hatched. This is a problem for anglers because it means that they spend less time near their nests and more time out and about. 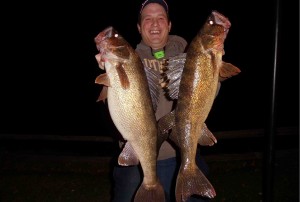 Walleye fish are interesting perciforms that are considered the top of many river and lake food chains. Catching these predators requires a keen set of skills and the correct information is required to capture them.

Walleye Bait: Though walleyes are very advanced hunters and may eat a wide range of fish and aquatic creatures, they are quite picky when it comes to what you decide to bait them with. You can try to bait a walleye with a lure that imitates minnow or similar fish. This is the most effective lure type, but in terms of live bait, it’s best to use a live minnow or nightcrawler in almost every situation.

Walleye Spawning Season: Though during walleyes’ spawning season, they will eat almost anything, summer mornings will require the most amount of skill. You’re also going to need to invest a lot more time if you are specifically fishing for larger walleye over 10 lbs. One of the most common ways to catch these freshwater predators is by trolling with live minnow, as this will get you a pretty good amount of walleye.

Jig and Lure: For larger fish, however, you need to think a little outside of the box. The biggest walleyes are usually females that are ready to spawn. These large fish are most active closer to night time, when they start moving outwards towards the shoreline to catch food. These large walleyes are a little pickier with what they eat, but you can still use a good jig and lure. Some scientists believe that walleyes can only see two colors – red and green, so you may want to utilize this information while picking the correct lure. You can even scent your jig by tipping it with live bait in order to trick even more walleye. Walleye prefer

Use a Slip Bobber: Walleye prefer cold waters, so on a dark, cold night, you’ll see the largest walleye. In colder weather, the walleye hunt differently than in warm weather. This means that you should adapt how you fish for them. Walleye prefer colder weather, and they move slightly slower and less exaggeratedly. The walleye will still go out and find food, but they most often stay around rock piles, cribs, and other similar underwater structures. During this time, it would benefit you to use a slip bobber. This will allow you to suspend your live bait, because large walleye like to stay around 20 feet. They’ll move around, but luckily these hunters tend to travel in schools. Once you locate one walleye, there are very likely several others in the same are.

For Warm Weather: In warmer temperatures, walleyes are much more aggressive. You can use a lure or live bait effectively, especially if it’s a warm night. The most effective thing to do on a warm night is to troll with a medium sized lure.

Walleye fish are amazing to learn about, especially because of how different they act at different times of year, temperatures, time of day, and stages in life. These fish are a little tricky to catch for first time anglers, but any experienced or even recreational angler can be catching several walleyes in no time with the correct knowledge.